Not so long ago, on the official site of FIFA was a published report for about international transfer activity for 2017, in which we found a few very interesting moments which 29 Football Agency wants to share with you. Also, our CEO Aleksandr Shchur will give his authoritative comment on some questions and also will share some thoughts about the new transfer window in the summer of 2018.

According to the FIFA last year football transfer statistics:

As we can see 2017 was a quite successful year for all football community. There were few records which never been spotted before the end of the 2017 year. But was everything so good in previous years? Well, it’s better once to see. We prepared some diagram so that you can compare previous 5 years and make your conclusion why 2017 is so successful. 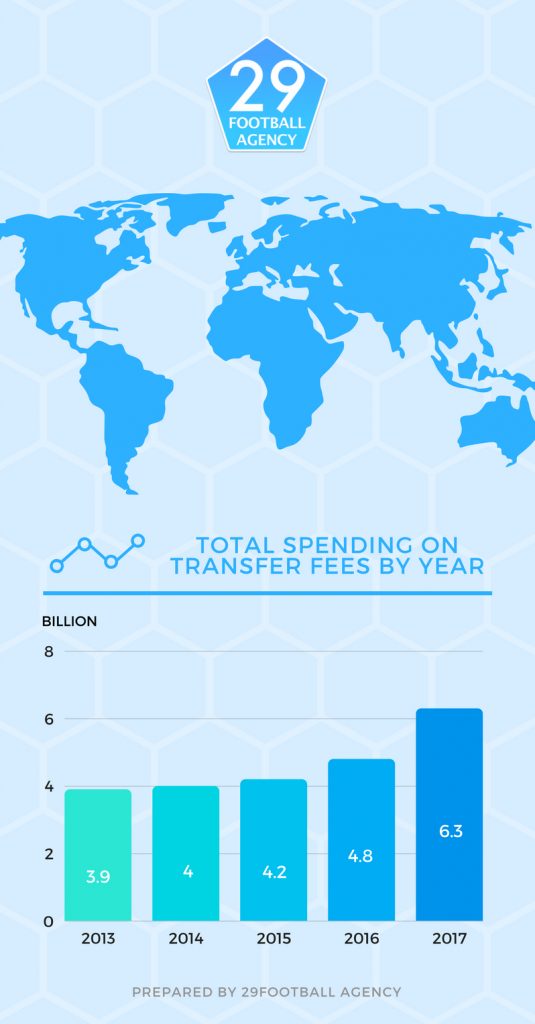 We asked our CEO Aleksandr Shchur some questions about a situation on market as well he will share some thought about upcoming summer transfers window.

Aleksandr, how do you think this summer we will see transfer more than $100 million?

I’m pretty sure that this will happen. Always after World cups or Euros some players loudly declare themselves, which for some reasons were in the shadow before World cup or Euro. For this reason, I am more than confident that we can expect some rather unexpected and high-profile transfers.

Undoubtedly, I think that the English market, namely the English Premier League, will be the active one. Clubs from the English top 6 will undoubtedly grow stronger and there are rumors that this summer English clubs will allocate some record funds for transfers and it might possible that new transfer record will be set this summer.

Regarding the new transfer markets, there perhaps the situation will be the same as the previous years. The market of China and southeast Asia will be the most active, but I would pay attention to Saudi Arabia. Last year in Saudi Arabia happened some quite significant political changes in the country. I think it will affect on football too. I think soon we will be able to see very interesting transfers in the clubs of Saudi Arabia.

From year to year, we see that with every new transfer window there are more and more transfer records about which we even could not even dream of. How do you think how long will this growth continue?

In general, it is difficult to forecast something, because football, like almost everything in this world, depends on a number of factors, such as economic, political, etc. In general, I can say that if nothing global happens, then everything will remain the same. For example, in 2016 all clubs in the world spent about $ 4.8 billion on the transfers, and $6.3 billion for 2017, which is on 32.7% more. Perhaps this year we will see about the same growth and according to our forecasts this year there will be closed deals of about $8 billion. To summarize, I can say with assurance that the times when the owner of the Golden ball could be bought for about 40-50 million euros have long passed.

Thanks for the interview